Named after John Lawrence Keenan, a former general manager of the Tata Steel, the headquarters of the Jharkhand State Cricket Association is set up right here within the premises of the ground. With Dalma hills and the chimneys of the Tata Steel factories as its backdrop, this 20,000+ seater is a beautiful setting to enjoy the sport. Built-in 1939 the ground made its first-class debut in the very year when Bihar played a match against Bengal. But it had to wait a while before it made its one day debut on December 7, 1983, when India played against the touring West Indies were badly hurt after their shocking defeat in the 1983 World Cup final. This stadium will best be remembered for a 221-run partnership between Gordon Greenidge and Viv Richards, where both smashed the ball outside the ground onto the streets.

The Keenan Stadium has been the home of cricket for the state of Bihar (undivided) and now Jharkhand (after the division of Bihar) ever since it was built. The memory of association of Keenan began with International cricket which started two decades back in 1983 when the first-ever One-day International match was played here between India and the mighty West Indies on 7th Dec.1983. West Indies won the match by 104 runs.

In order to build a bag inning, we need to have a good start. India did not have a good start at the Keenan, since then it had not been a happy hunting ground for the Indian team. India had to wait for 17 years when the so-called "unlucky" tag attached to Keenan was finally smashed by team India, under India's most successful Captain, the Prince of Kolkata, Sourav Ganguly, when India defeated South Africa by 6 wickets on 12th March 2000.

Keenan has been blessed with one of the best pitches in India. It has always been a batting paradise, but it also has something in it for the bowlers. When we talk about the outfield there is only one ground with better than Keenan, i.e, Mohali. With a seating capacity in excess of 20,000, an ODI and a full house at Keenan is a pleasant sight for both the eyes and the ears.

It is the Mecca of Cricket in this part of India. Keenan has been the witness of lots of lows and highs in its history of the last 70 years. The sweet memories of the Keenan include the runs scored by Robin Singh to register India's first victory at the Keenan, the last ball boundary by Sarwan of Ajit Agarkar, 4 consecutive boundaries by the master blaster Sachin Tendulkar of Dany Morrison. 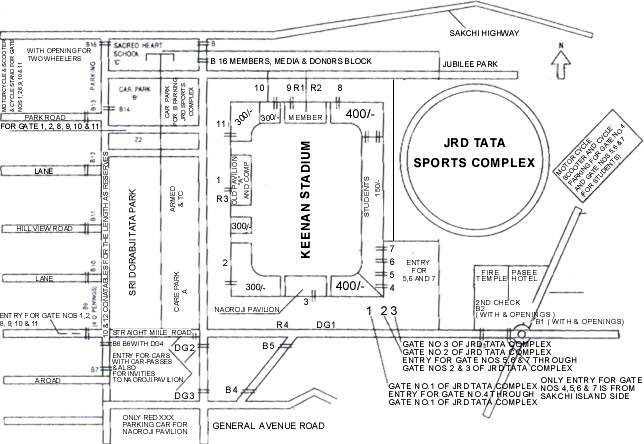